Yes, she's old and a little fragile, having been around since 1945 - 'Not that old' I hear you say. Maybe not, but in this case, VERA is a Lancaster Bomber. She did not carry out active service, being built in 1945 and therefore just missing out on the war. She's cared for by the Canadian Warplane Heritage Museum in Hamilton, where she is privately owned. It's taken a while to organise, but our Canadian friends have managed to achieve an enormous task, in raising the funds to make this trip to Britain and grace our skies once more with another flying Lancaster. There are only two airworthy in the entire world. Incidentally, her civil registration is C-GVRA, but she has become affectionately known as VERA. She arrived here on August 9th and has been wowing crowds ever since, performing training flights, flypasts with the RAF and on board tours. 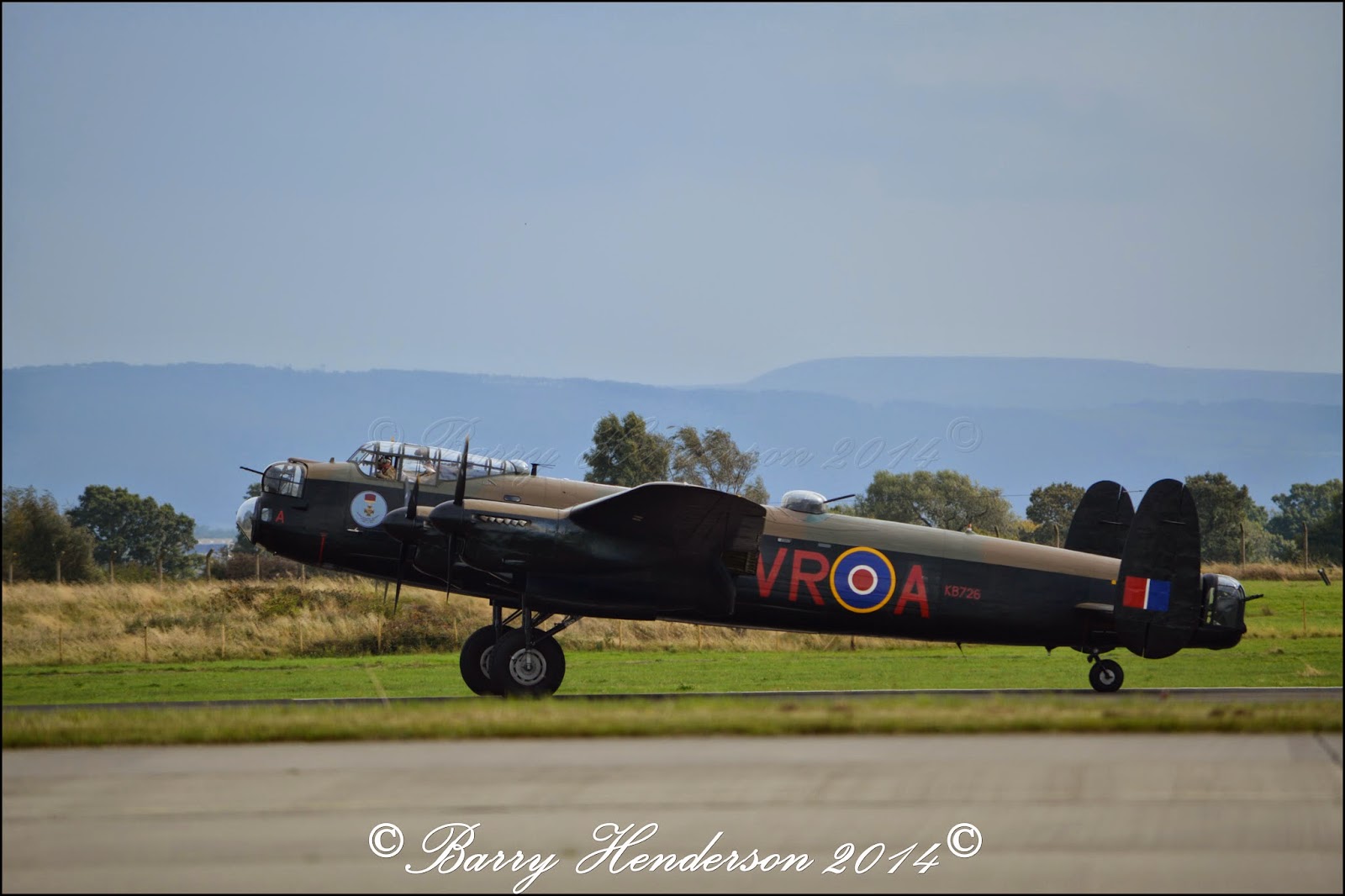 A short while ago, I wrote a post about Pilot Officer Andrew Mynarski, a serving Canadian gunner on a Lancaster Bomber, who tragically lost his life whilst trying to save his colleague, trapped in their burning Lancaster. Pilot Officer Mynarski was posthumously awarded the Victoria Cross, the Commonwealth's highest award for gallantry, on June 13th 1944, when his Lancaster was shot down in flames. VERA is painted in the colours of his aircraft KB726 - VR-A, which flew with RCAF No.419 (Moose) Squadron.

Their base was RAF Middleton St. George, which is now known as Durham Tees Valley Airport. The former Officers Mess remains, now known as the St. George Hotel, in front of which stands proud the bronze Memorial Statue dedicated to the memory of Andrew Mynarski and to all who lost their lives in battle. 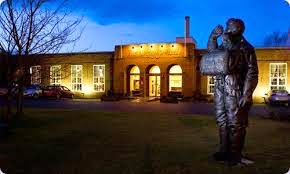 On Thursday 28th August, I went along to a special event at the airport, and attended a Memorial Service which included a number of veterans, former Lancaster Pilots, aircrew and veterans of the Women's Auxiliary Air Force. Towards the end, there was another poignant moment when a Canadian gentleman was invited up to the podium, carrying with him, his late mother's ashes. He went on to explain how his mother had served at Middleton St. George during the war as a WAAF, and it was here where she met her husband to be. Now, having recently passed away, her son had made the trip to the UK, to her former land and after a very moving speech he proceeded to bury her ashes beneath the memorial of Pilot Officer Andrew Mynarski. I believe he said, 'Mom, you're home now.' 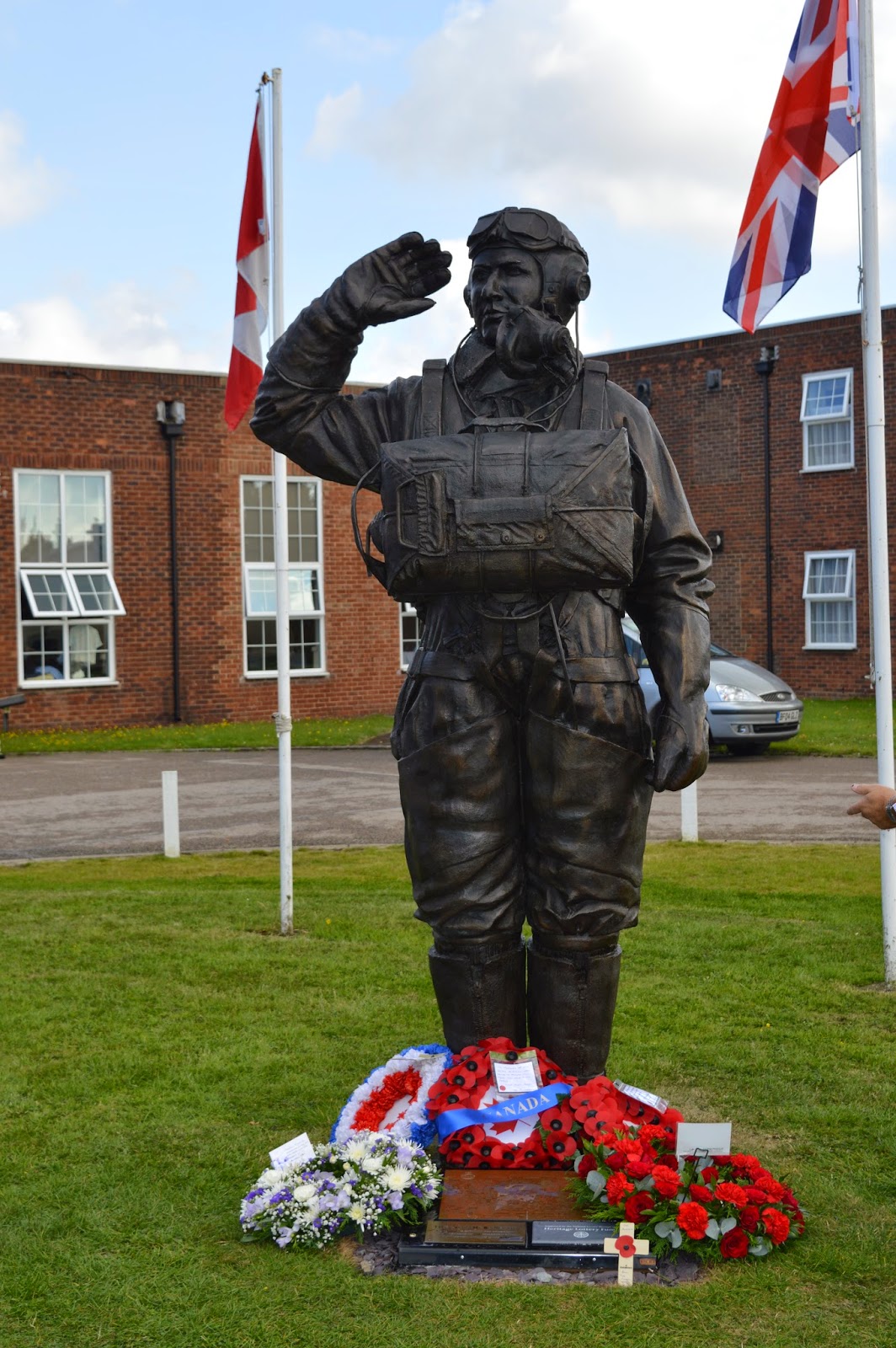 So, it was my first Memorial service at a former base and I certainly had the feeling of family being all around. A comforting presence, a place where men, often mere strangers, were bound together by duty and service, by fear and expectation and very importantly by hope. Each crew became a tight knit family. They had to in order to survive. They may well at times have had a love-hate relationship, but when it came to the crunch, they had to be able to depend on each other. Such camaraderie is often not experienced these days, I don't believe, unless of course you are in the Armed Forces. But there, at the service, I felt the reverberation of something that had been and still is today, very special indeed - a strong, spiritual connection. 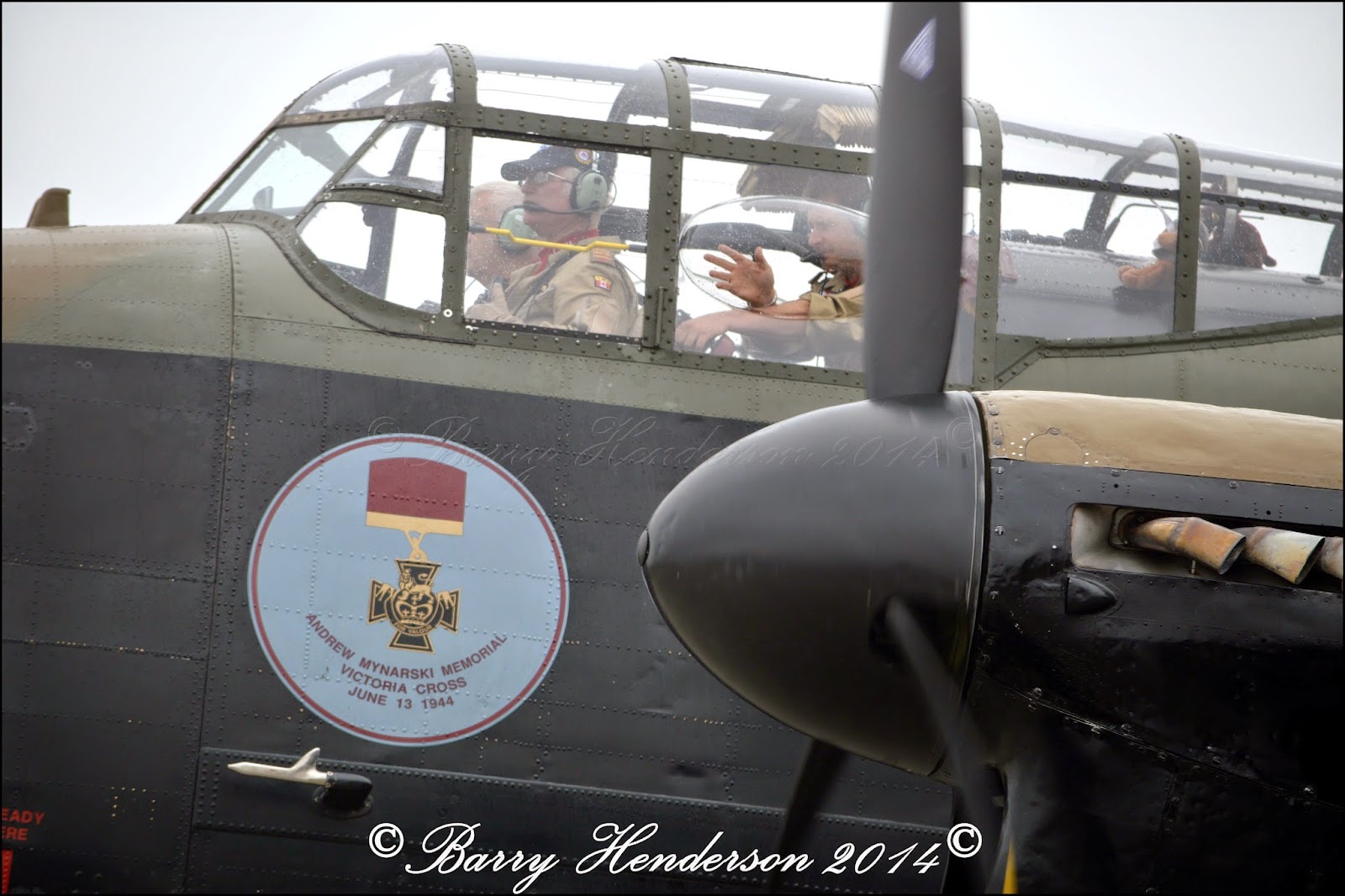 Afterwards, we made our way across the tarmac,  towards the runway, and there in the distance stood VERA, her nose pointing skyward. Such a beautiful sight to behold. It was lovely to see veterans being allowed to see inside the Lancaster and for many this was probably the first time in sixty nine years since they last set foot in a Lancaster Bomber. Both poignant and emotional for them, it was a very special day and the credit goes to the crew of VERA and the team behind them, for all their efforts in making this truly spectacular and special journey.
One elderly lady made the trip to see the base where her beloved brother served all those years ago. She was not a well lady and was in a wheelchair, aided by her family. In her hand, she held a printed A4 size black and white photograph of a stationery Lancaster Bomber, with the crew stood in front. Her brother was one of the gunners, on the far left. He was only seventeen years old when he joined up. Sadly, he was one of the many bomber boys who gave their lives doing their duty - 55,573 in total. When you look at the figures of those lost, it's tragic and it makes you ponder a while. But when you meet and see those personally affected and listen to their stories, it's very moving indeed and each story, each man becomes personal to you. He is given a face, a name and a life that he sacrificed and you will remember. 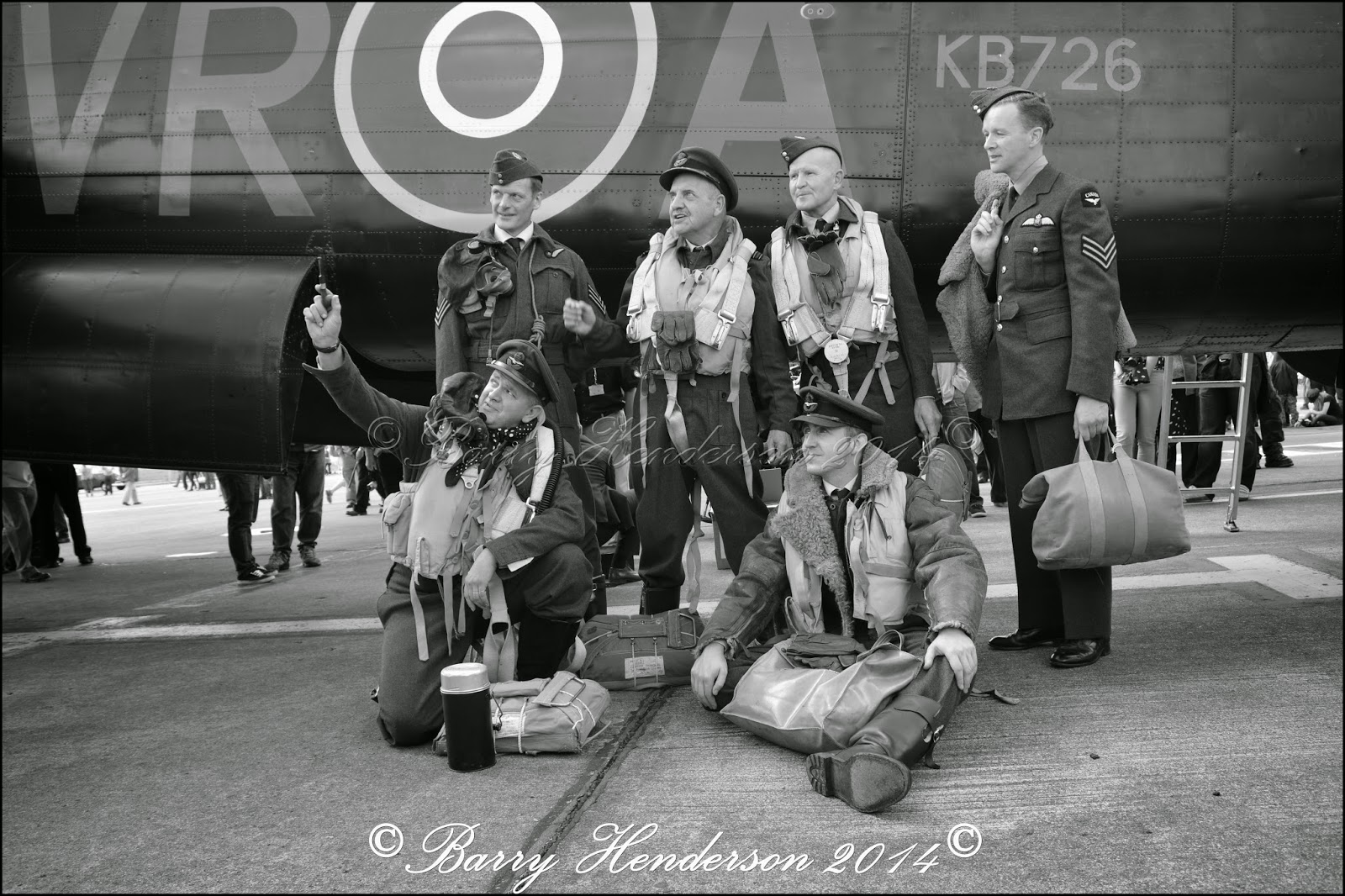 We were most fortunate as spectators to witness VERA firing up all four Merlin engines; one after the other roared to life. A tremendous sound I shall never forget and it certainly does make the hairs on the back of your neck stand up. That was when I felt the magic; the dream; the ship was alive and roaring and I closed my eyes and was transported back to the 40's, when the airfield would have been filled with the thunder of many Merlin's as the Lancaster's were making ready for a mission. And then, she took off, performing several flypasts for us, including one over the Mynarski Memorial, before coming back in to land. She was quite literally poetry in motion during her flight, graceful and effortless in the English sky. And then she stood once more on the tarmac, silent and proud, a lasting memorial herself to all those brave boys who went to war. 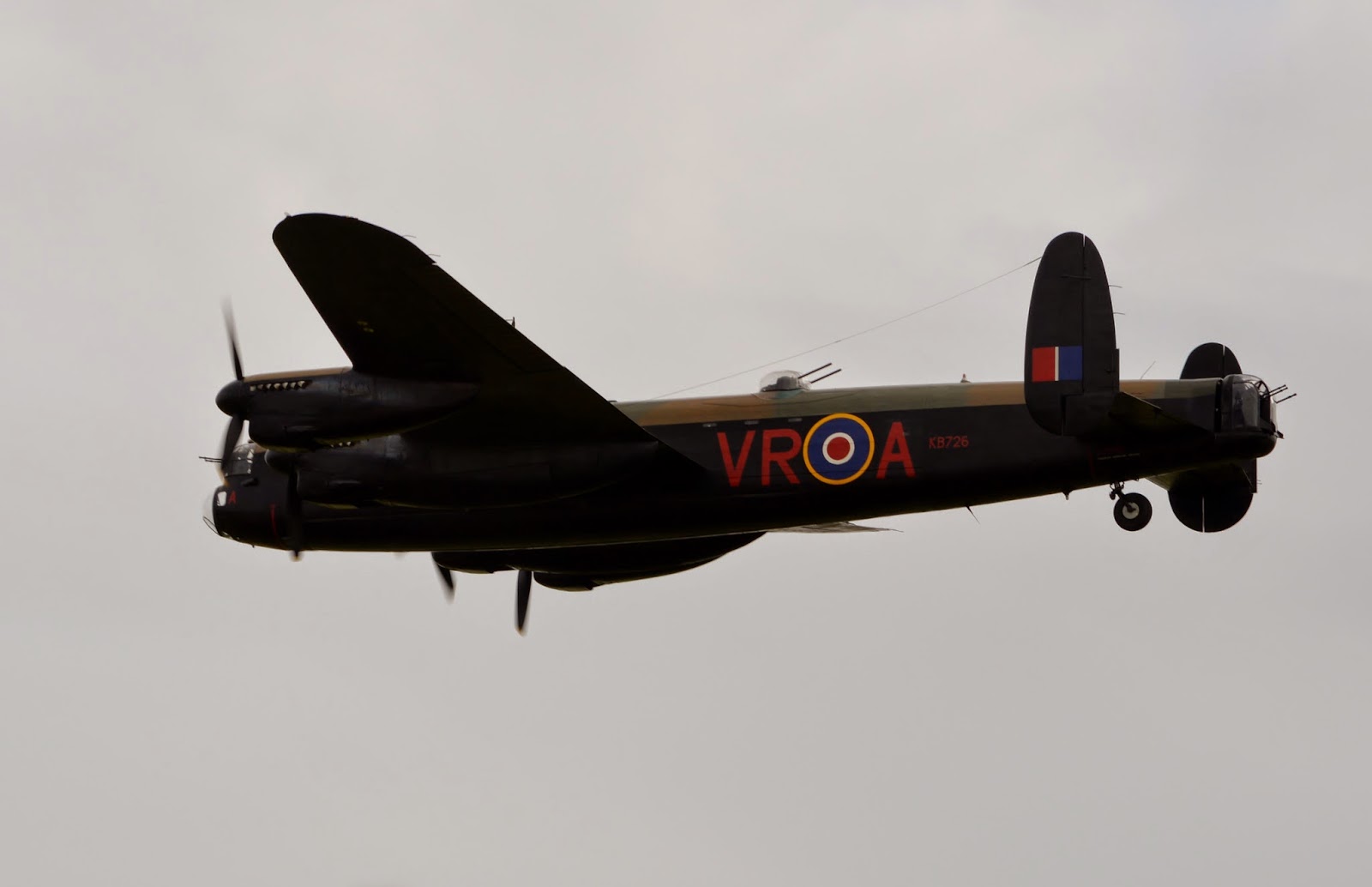 And, as the people milled around on the ground beneath her mighty wingspan, I noticed how they stared up in awe at this great monumental presence, the Lancaster. Multiple faces held many stories close to their hearts, now archived in memory. But their eyes hinted at what had gone before them. Who had walked these grounds during the war, in those dark days when crews awaited missions and Lancaster's took to the skies in vast numbers, heading off to Europe. 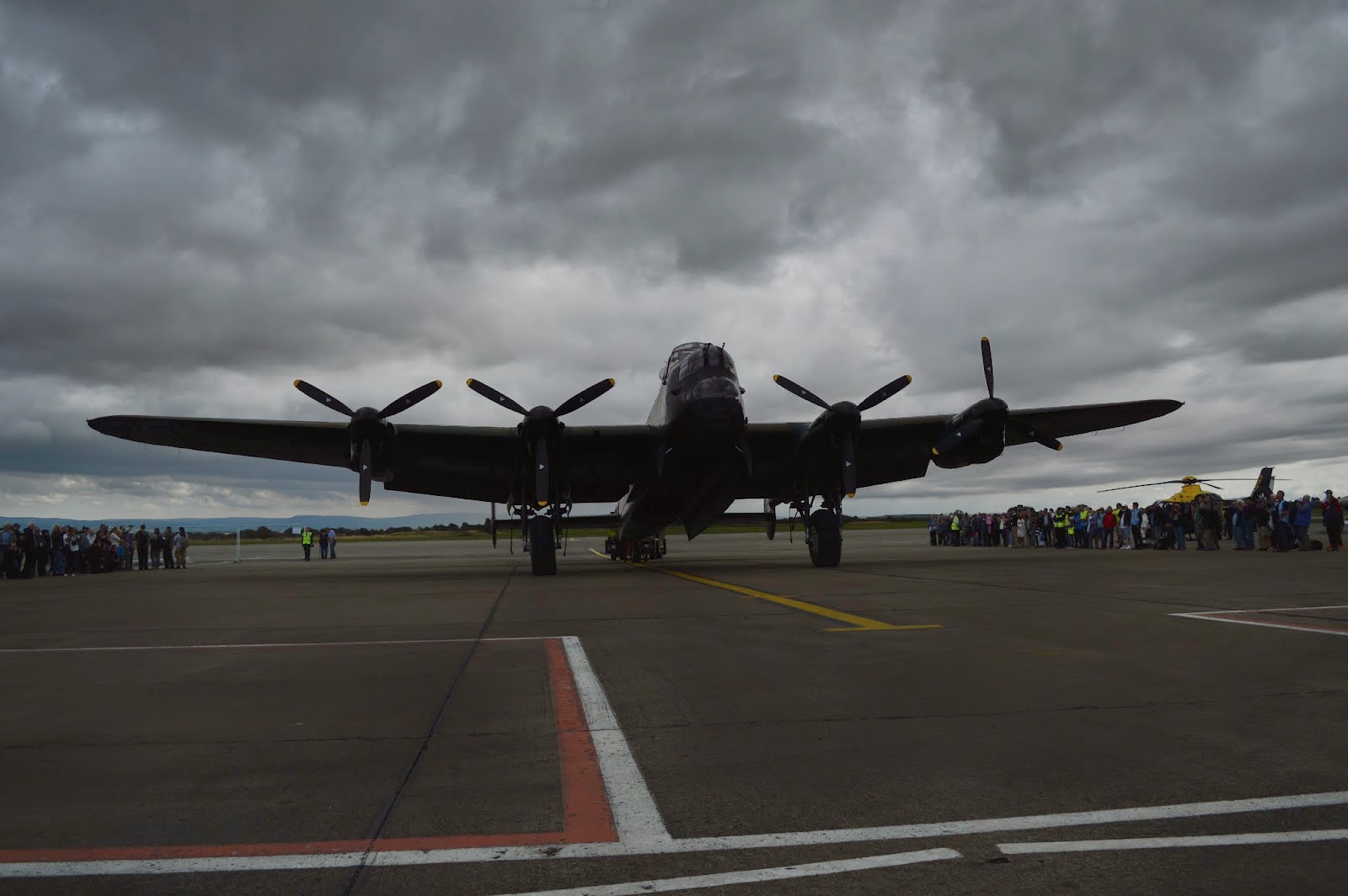 I saw sadness, joy and pride etched upon the faces of veterans and their families. Wives had lost their husbands there. Parents had lost sons. Men lost friends.  It was a day for those bereaved to remember and pay their respects once more, and also perhaps to pay their respects and give thanks to the Lancaster for bringing so many back home safely. 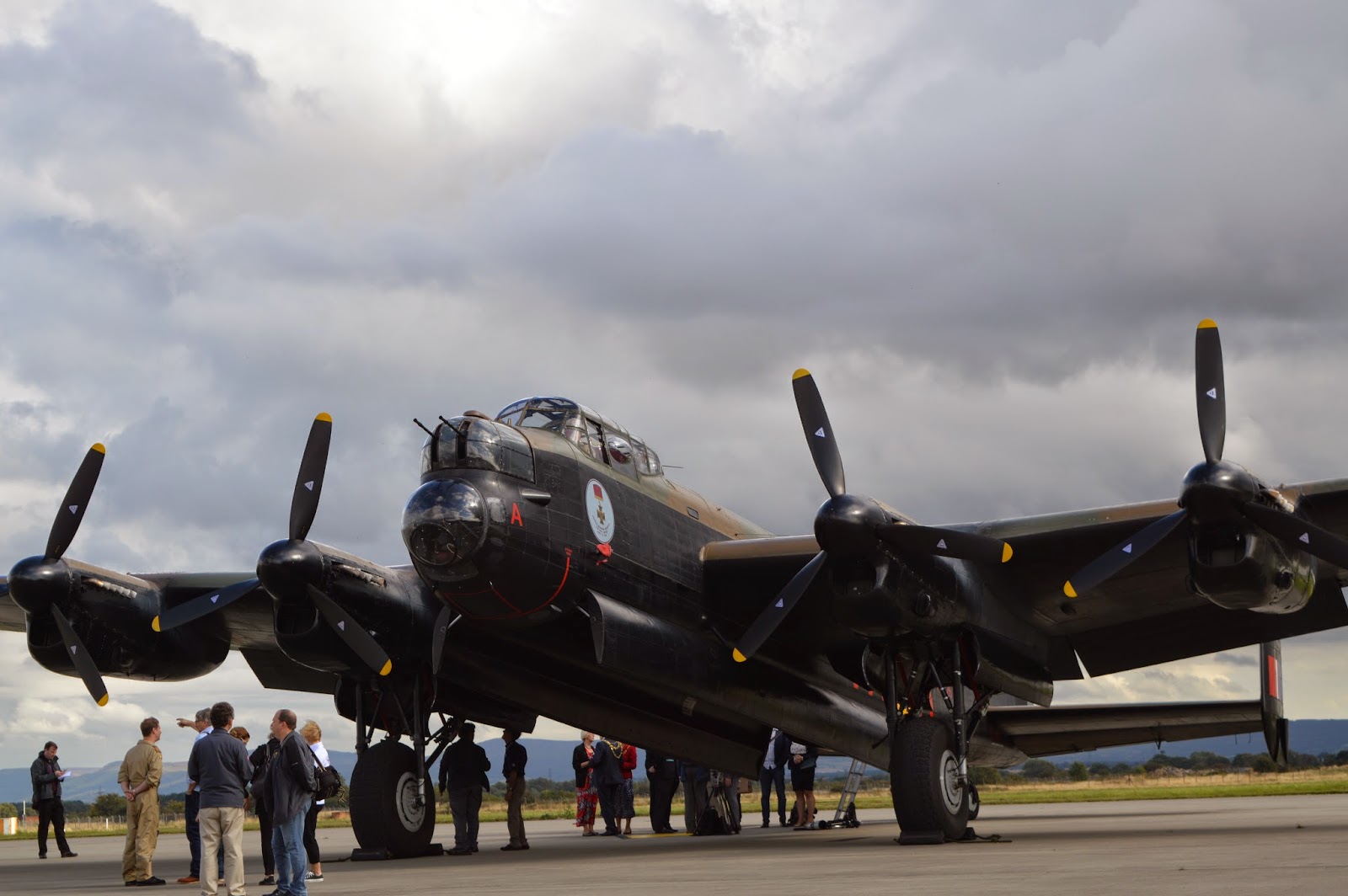 Right now, VERA is stuck at Durham Tees Valley Airport, undergoing an engine replacement in hangar one - or she soon will be. Good old Lincolnshire Aviation Heritage Centre (who own the third Lancaster, 'Just Jane -non-flying) and RAF Coningsby are also helping, having loaned them an engine and resources. All of her schedule has been cancelled but our fingers are crossed that she will be up and ready for the 2nd of September, to perform her fly past with our very own Battle of Britain Memorial Lancaster, Thumper, as they roar over East Kirkby airfield, the home of Just Jane, at the 3 Lancs Event. I don't mind saying that I'm still gutted to have missed out on tickets for this on the 7th but I hope they are up and running by then and everyone has a great day. What an experience it will be, to have 3 Lancaster's together again - certainly is a once in a lifetime event. 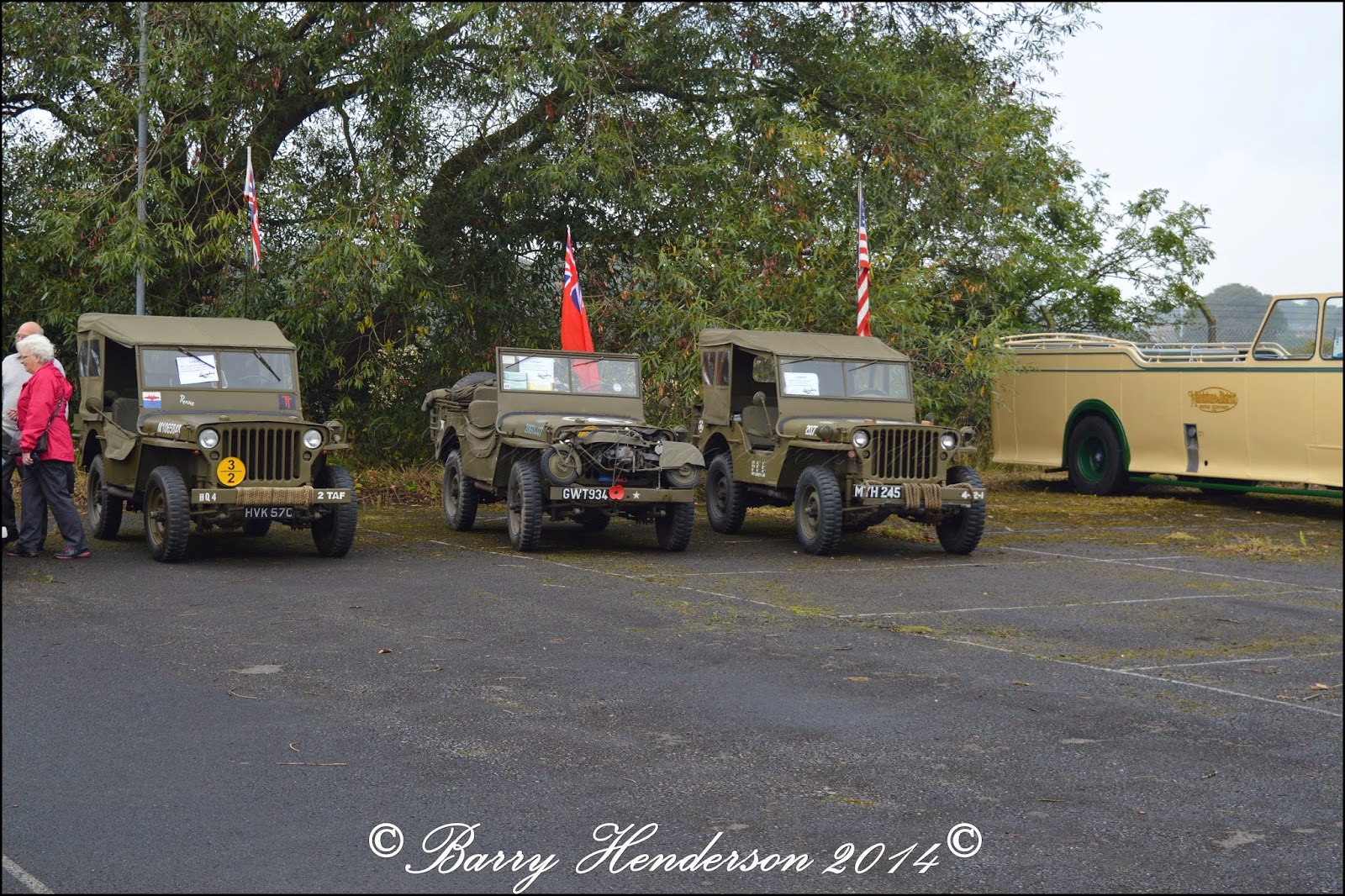 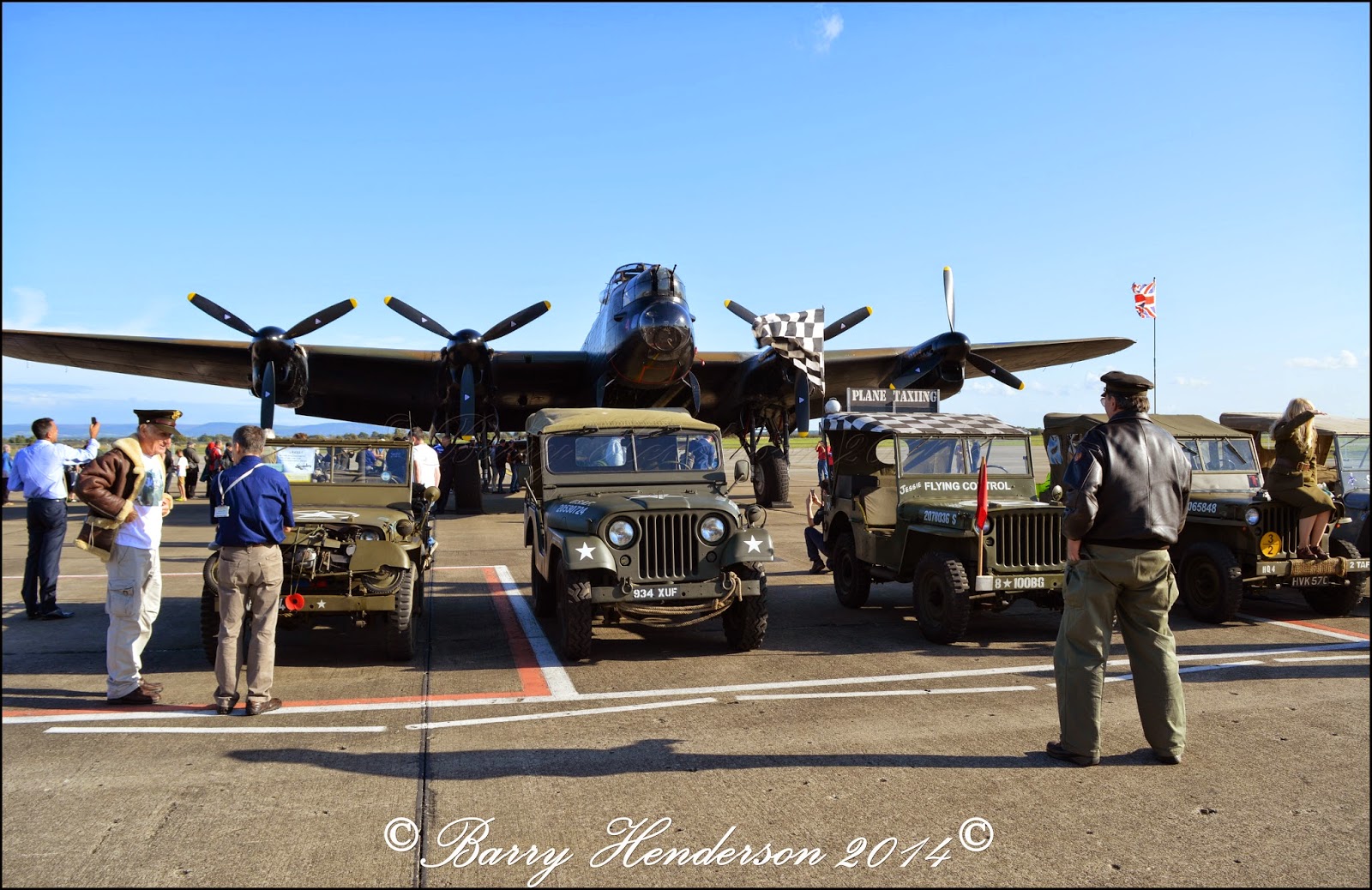 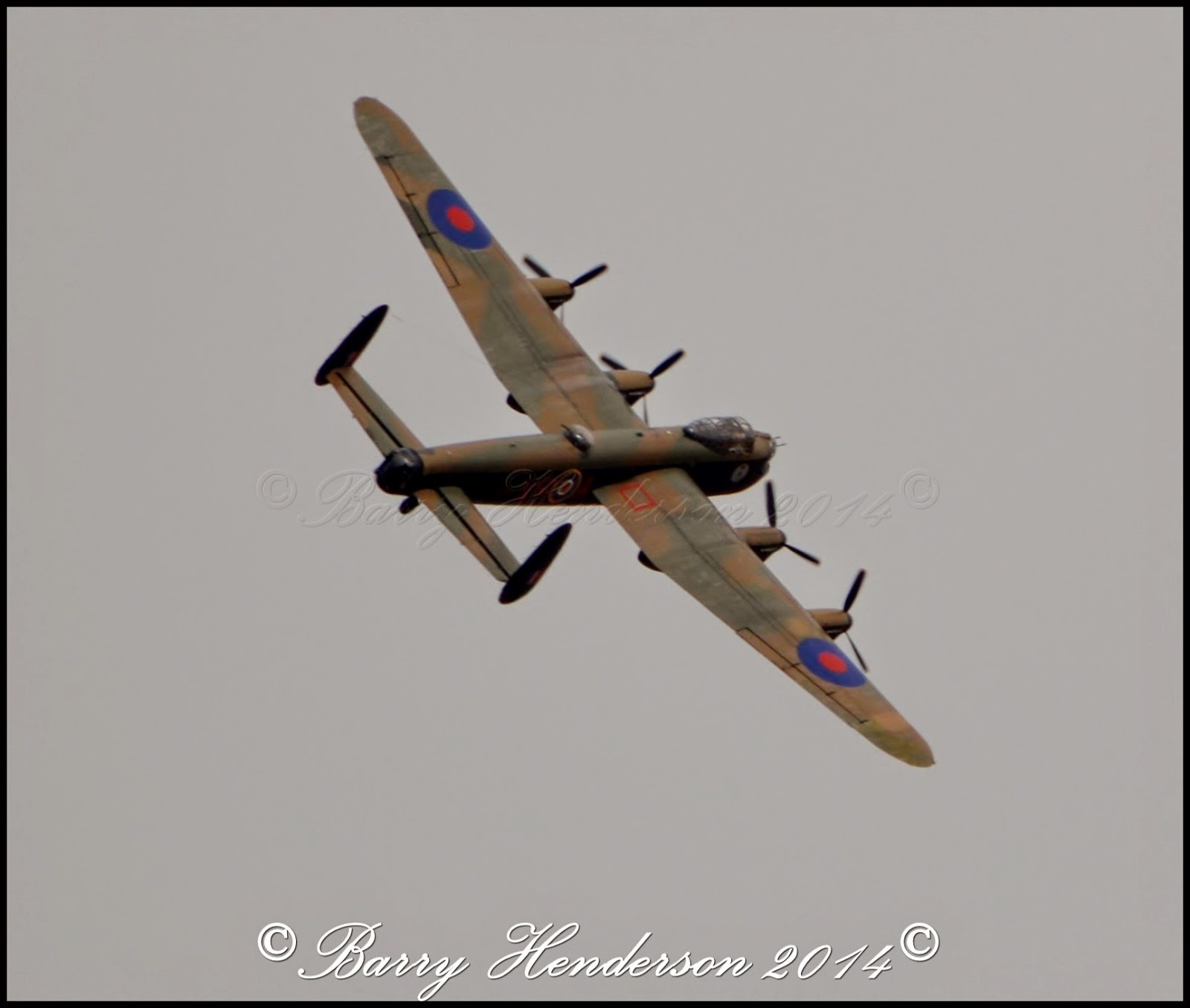 There were various war time military vehicles and cars and a number of re-enactors wearing authentic uniform and clothing. They made the day more special and gave it a period feel. Truly spectacular.

VERA is scheduled to return home to Canada mid September. I, like many here, give thanks to the crew and team and wish them a safe journey home. And as for me, visiting the warplane heritage museum in Hamilton, Canada has now become my no.1 holiday destination and is in the planning, although I may be a few years off. I'm hoping, that one day, I'll be able to visit and have a flight in VERA. Fingers crossed.
Links:
http://www.lincsaviation.co.uk/
http://www.warplane.com/visiting-canadian-warplane-heritage.aspx

If you wish to follow the Canadian Lancaster Tour, follow the link below:
http://www.lancasterbomberale.co.uk/
Posted by Suzy Henderson