In June and early July 1940, the Luftwaffe regrouped in readiness for Operation Sealion - the invasion of Britain. Their aim was to destroy the Royal Air Force. The Battle of Britain began on the 10th July.

As the Prime Minister, Winston Churchill announced, "What General Weygrand called the Battle of France is over, the Battle of Britain is about to begin. Upon this battle depends the survival of civilization. Upon it depends our own British life, and the long continuity of our institutions and our Empire. The whole fury and might of the enemy must very soon be turned on us.

Hitler knows that he will have to break us in this Island or lose the war. If we can stand up to him, all Europe may be free and the life of the world may move forward into broad, sunlit uplands. But if we fail, then the whole world, including the United States, including all that we have known and cared for, will sink into the abyss of a new Dark Age made more sinister, and perhaps more protracted, by the lights of perverted science.

Let us therefore brace ourselves to our duties, and so bear ourselves that if the British Empire and its Commonwealth last for a thousand years, men will still say, ‘This was their finest hour."

The air campaign waged by the German Air force lasted until the end of October that year.

This day, September 15th is known as Battle of Britain Day. Today is the 74th anniversary of this day, which in 1940 was the climax of the Battle of Britain. The attacks of the Luftwaffe had begun on the 7th September. Hitler was ready to go with Operation Sealion - the airborne and amphibious invasion of Great Britain - and knew that if his army was to invade Britain it would have to be this day, the 15th. The weather would be closing in any time and would scupper any chances of a successful invasion. They also believed that the RAF was worn down, resources low and was ready to crumble.

The Luftwaffe had received a change of orders and from the 7th September they changed from bombing RAF bases and radar stations to bombing London. This gave Fighter Command the breathing space they needed and by the 15th, the RAF were in greater shape than the previous week. The Luftwaffe's orders were simple. Total annihilation of the RAF and they were ready to launch the largest assault so far upon the City of London.

(Image courtesy of Wikimedia commons)
However, they made one huge mistake and that was to underestimate the value of radar. Whilst the Luftwaffe bombers and fighter escorts were departing from their base in Calais, forming up in the sky above the Channel, Fighter Command had a birds-eye view. This gave the RAF the time they needed to ready the appropriate squadrons and stations.

Around 1500 aircraft took place in the battle which raged in the skies until dusk. One bonus for Britain was the weather. Heavy cumulus and resulting poor visibility prevented the Luftwaffe from inflicting severe damage on London. 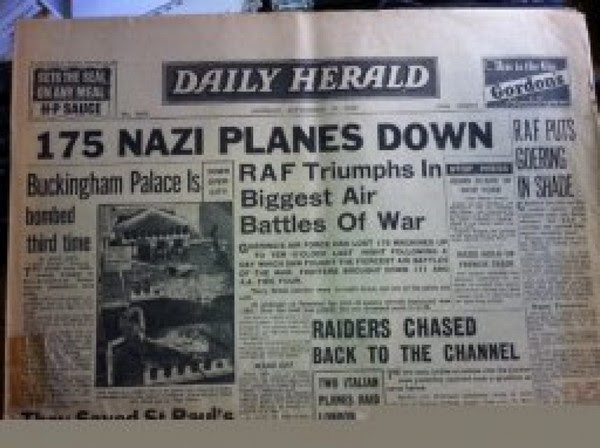 Following the raid, Hitler postponed Operation Sealion. Having been defeated in daylight, the Luftwaffe changed to night bombing, hence came the beginning of The Blitz, a night bombing campaign by the Luftwaffe that lasted until May 1941.

So, on this day in 1940, Pilots answered the call to battle at a relentless pace. Ferocious dog fights ensued over British skies, white contrails scarred the burning blue as pilots flew and fought to exhaustion. And when they landed, to rest briefly as ground crew readied their aircraft once more for battle, you might picture them, standing around, or lying for a while upon the grass, some sleeping, some chatting, some smoking as they contemplate the sheer bloody madness from above.

The young Pilot stands, hands on hips, his chest heaving beneath his Mae West as he battles to steady his breathing as he sums up the last dog fight with his squadron. He tries to smooth down his hair, a thatch of auburn, sweat streaked and unruly, refuses to comply and springs back up. Dark shadows frame his eyes which bear fresh lines etched into the corners - lines which bear the sleeplessness and the horrors of battle. A cigarette sits jammed between the first two fingers of his right hand which is clenched tight. What you can't see are the hidden thoughts racing through his mind, thoughts he has just witnessed up in the sky from the cockpit of his Hawker Hurricane. His friend, shot down in flames. There was no billowing white silk sailing down to earth. His Hurricane stands behind him upon the grass, riddled with bullet holes from the Luftwaffe Pilot he has just shot down. The victory was a close call and it almost went to the German. But this Pilot knows that and he thanks God that he has been most fortunate this day.
(Image courtesy of Wikimedia commons) Fighter Pilots scramble
Spare a thought today for all the young men who went to war and fought in the skies here and above foreign lands. For our 'tomorrow', many gave their 'today' and we honour them every time we recall their heroic achievements, their heroic struggle for air supremacy and how they fought the Luftwaffe into retreat. Per Ardua  Ad Astra - Through adversity to the stars.

I would like to close with a poem by John Gillespie Magee Jr, (9 June 1922 - 11 December 1941). He served with the Royal Canadian Air Force and was killed in an air collision over Lincolnshire. He wrote the sonnet High Flight a few months before his death.

Oh! I have slipped the surly bonds of earth
And danced the skies on laughter-silvered wings;
Sunward I've climbed, and joined the tumbling mirth
Of sun-split clouds - and done a hundred things

You have not dreamed of - wheeled and soared and swung
High in the sunlit silence. Hov'ring there

I've chased the shouting wind along, and flung
My eager craft through footless halls of air.
Up, up the long delirious, burning blue,
I've topped the windswept heights with easy grace
Where never lark, or even eagle flew

And, while with silent lifting mind I've trod
The high unsurpassed sanctity of space
Put out my hand and touched the face of God.
(John Gillespie Magee Jr, 1941)

We will remember them.

Email ThisBlogThis!Share to TwitterShare to FacebookShare to Pinterest
Labels: burns