The Other Douglas Bader

Many people have heard about Douglas Bader, the RAF pilot who miraculously survived an aircraft crash in the 1930s, but sadly lost both of his legs. Bader, through sheer courage, willpower, and true grit returned to flying after the outbreak of WW2.

But Bader was not the only double amputee to serve in the war. There was another.

Colin Hodgkinson was born in Wells, Somerset on February 11th 1920 and he joined the Fleet Air Arm for pilot training in 1938. He trained on the aircraft carrier Courageous. Sadly, during training, Colin was involved in a mid-air collision with another Tiger Moth and suffered severe injuries, and like Bader, had to have both legs amputated. He had been flying blind, with a hood over his head during instrument training. The instructor accompanying Colin was killed. 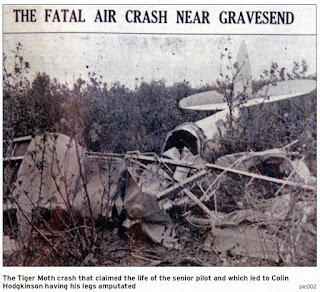 Once he was fit enough, Colin was sent to Roehampton to the limb centre and fitted up for a set of tin legs. He was subsequently invalided out of the forces and given a pension of £3 per week. However, before he was discharged back to civilian life, Colin persuaded his doctors to send him for some convalescence leave and he went to Dutton Homestall. While he was there, he met Archie McIndoe, a plastic surgeon in charge of Ward III (nicknamed the Beauty Shop) at the Queen Victoria Hospital in East Grinstead, where he treated burned airmen.

Archie would later state, "He was a red-headed thick-set figure precariously balanced on two artificial legs which were planted firmly apart and braced backwards to support his swaying body. His face was badly scarred. His eyes reflected the bitter desperation mixed with wariness which betrayed a constant anxiety to maintain his balance. He kept within reach of a wall or a convenient chair. He was watching me carefully and obviously had something to ask me. We moved into a corner and talked."
Colin asked Archie to help him get back into the Navy. While they chatted, Archie's gaze raked over Colin's face. He had keloid scar tissue above his left eye, so Archie said, "You ought to come over to the hospital sometime. I'd like to fix up that eye for you."

Archie had become frustrated with what was known as the RAF's ninety-day rule. If an injured serviceman was still unfit for duty at the end of 90 days, he was then invalided out and given a pittance of a pension as determined from the regulated schedule of payments set for particular disabilities.

This caused men financial hardship, being unable to work, being unfit for many things, and also being stripped of their wings, something akin to stripping them of their spirit. Archie had seen it happen and he disagreed with the rule and it was one which infuriated him. Now, here, he had his chance. This burly six-footer before him, Colin Hodgkinson would give him the ammunition he needed to tear into the Air Ministry.

And so he operated on Colin and fixed up his eye. Now, Colin was on the books, he was one of Archie's boys and became a member of the infamous Guinea Pig Club. Archie then began one of his own personal battles. He set about writing to the Admiralty and when that had no effect he telephoned. In the meantime, he used his influence with an old friend and persuaded him to allow Colin to fly his light aircraft. He also told Colin to practice walking on his tin legs, to improve his gait and stability.

As the weeks passed, Archie was getting nowhere fast. Then a chance meeting at a dinner with the secretary to the First Lord of the Admiralty won him some ground. Archie managed to persuade him that Colin was indeed fit and capable of returning to service and was told that the matter would be given consideration.

It worked. Colin was called back to active service and posted to a naval station in Cornwall at the beginning of November 1940. He was the first man to return to service while drawing a pension and this established a precedent. Soon afterwards all of the services opted to abolish the ninety-day rule. In celebration of this huge victory, Archie organised a drinks party back at his home for all the walking members of Ward Three.

Colin was determined to fly Spitfires and, inspired by Douglas Bader, he obtained a transfer to the RAF as a Pilot Officer. In December 1942 he was posted to No 131 Squadron at Westhampnett, Sussex. When the squadron left he was allowed to remain and joined No 610 Squadron. Colin became known as 'Hoppy' Hodgkinson, for obvious reasons.

In August 1943, he was flying escort duty to a group of American B-26 Marauders when his squadron encountered more than fifty Focke-Wulf 190s. A dog fight ensued and he shot down a FW 190 that was heading to attack his wing leader, 'Laddie' Lucas.

Later, Colin joined No 501 Squadron as flight commander. In November 1943, during a reconnaissance sortie, his oxygen failed and he crashed into a field in France. He suffered serious injuries and one of his legs became detached as farm workers pulled him from his blazing Spitfire. He was duly taken prisoner and sent to a POW camp. Ten months later, the Germans repatriated him, thinking he was no longer useful to his country and he was sent back to McIndoe for treatment.

Colin returned to active duty near the end of the war and was based at Filton in Bristol as a ferry pilot. In 1946 he left the RAF but returned in 1949 and served with No 501 & 604 Squadron, flying de Havilland Vampires until the early 1950s. Returning to civvie street, Colin entered the world of advertising and PR, later starting up his own successful business, Colin Hodgkinson Associates.

After a brief spell in politics, he enjoyed a stint as an air correspondent with ITN and then later in 1957 he published his book, "Best Foot Forward," a biographical account of his life and his war. When his first wife June Hunter died, he married Georgina, a Frenchwoman. Colin Hodgkinson died on 13 September 1996. 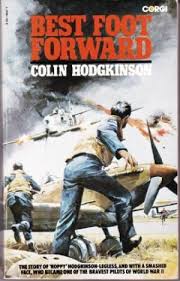 Here's a link to a British pathe newsreel of Colin Hodgkinson's book signing with RAF pals including Johnnie Johnson and Archibald McIndoe :
http://www.britishpathe.com/video/legless-pilot-puts-best-foot-forward