When WW2 ended, Germany was defeated and divided up. The Soviet Union controlled East Germany while the west was divided up between the US, Britain, and France. Berlin, the capital city, rested within Soviet power but was split into four, with one-half of the city under Soviet control and the rest divided between the other countries.
The Allied Control Council was established in Berlin, and this union's mission was now to govern and rebuild Berlin. 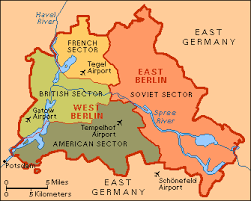 Unfortunately, nothing involving governments and politics is simple, and soon there were rifts as the Soviet Union disagreed with the other allies over such things as German Unification, Soviet War repatriations, and ideology. The Soviets were vying for more say in the economic future of Germany, something the British and the US would not consent to.

It is relevant to indicate Churchill here. Churchill predicted WW2 in the early thirties when no one in parliament would listen. He was right. He also saw what was coming in Europe - or rather who, after the war ended. In a speech in Fulton, Missouri, he said, "From Stettin on the Baltic to Trieste in the Adriatic, an iron curtain has descended across the continent."

Early in 1948, things came to a head, and Stalin ordered the Allies to leave Soviet-controlled Berlin. Trains were stopped on various days in June and finally on June 21st the Soviets halted a train carrying US Military supplies and denied it entry to Berlin.
Then the Soviets cut off all land and sea access to West Berlin. There would be no fresh supplies from the West. Berlin had a population of just over two million to feed, and there was food for around thirty-five days and coal for forty-five days.

US Military Commander General Lucius Clay formed a plan to send an armed convoy into Soviet controlled Germany, but this action would almost certainly have led to another war, something which some in government called for, given the aggressive and antagonistic actions of Russia.

British Commander Sir Brian Robertson suggested dropping supplies by air, and after consultation, the plans were drawn up. On June 26th the first aircraft took off from bases in England and Western Germany and landed in Berlin. The scale of this operation was enormous, and it posed a great logistical challenge as aircraft landed at Tempelhof Airport every four minutes throughout the day and night. Often the pilots had to fly two or three round-trips daily in WW2 aircraft that often required maintenance and repairs.


To the RAF, this was known as Operation Plainfare. West Berlin was literally under siege, and the Allied Forces worked tirelessly to keep supplies coming. The German people would no doubt have been terrified, humiliated and lost. Having endured almost six years of war, and bombings, the one thing they feared most as the last days of war closed in was the arrival of the Russians. They were right to fear them. There were a lot of 'war crimes' committed, crimes which the Russians have never had to account for. Soviet soldiers committed inhumane acts and had it not been for the Allied Forces, the people of West Berlin would have starved.


To the Americans, the operation was known as Operation Vittles, because they were "hauling grub." They flew C47s and C54s from airfields in the American zone. Initially, the US and the RAF operated independently of one another, with the same aim of course, but by mid-October 1948 they combined their efforts with a single airlift task force HQ. American aircrews flew over 189,000 flights.

And let us remember with pride the grand efforts of the ground crew who also worked tirelessly to keep all the aircraft airworthy in support of the airlift.
During the term of the airlift, thirty American servicemen and one civilian were killed as a result of twelve air crashes. The RAF suffered five air crashes with the loss of eighteen airmen.

British aircraft also flew more than 131,000 sick people out of Berlin to West Germany for medical care. The British began with two squadrons of Douglas Dakotas, but quickly realised it was not enough. They acquired more aircraft and utilised the larger Avro York transport aircraft. Then, on July 4th they also used two Squadrons of Short Sunderland flying boats which took to the skies from the River Elbe. They carried supplies out and returned with industrial goods and refugees.
In November 1948 Squadrons of new Handley-Page Hastings transport aircraft arrived.

For almost a whole year aircraft flew twenty-four hours a day, making much-needed deliveries. Over 200,000 aircraft made over one and a half million tonnes of supplies. The blockade continued until May 12th, 1949. During this time, the Russians were seen as bullies, holding civilians as hostages in West Berlin, with the constant threat of starvation. They were viewed scornfully by the rest of the world for their inhumane and antagonistic behaviour.

Meanwhile, the success of the airlift served to show the world that the Allies had air and technological superiority. By the time the blockade ended, West Germany had become a separate nation.
The airlift continued until September 1949. By now the eastern section of Berlin was now a part of Soviet East Germany and West Berlin was a separate territory with its own government. It officially ended September 30th 1949.

For the people of Berlin, the war might have ended in May 1945, but conflict remained with them, and of course, flowed throughout the Cold War years. With the current Syrian conflict, I wonder, do leaders ever learn and will we ever achieve world peace?