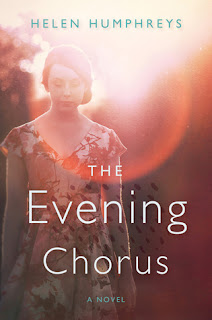 Downed during his first mission, James Hunter is taken captive as a German POW. To bide the time, he studies a nest of redstarts at the edge of camp. Some prisoners plot escape; some are shot. And then, one day, James is called to the Kommandant’s office.Meanwhile, back home, James’s new wife, Rose, is on her own, free in a way she has never known. Then, James’s sister, Enid, loses everything during the Blitz and must seek shelter with Rose. In a cottage near Ashdown forest, the two women jealously guard secrets, but form a surprising friendship. Each of these characters will find unexpected freedom amid war’s privations and discover confinements that come with peace.

Well, it's no secret that I love WW2 books, although not all of them of course. But this book caught my attention, late in the day as it was published a few years ago. Still, there's nothing more wonderful than discovering a new book and I'm so glad I found this one. I'm still not completely certain how to sum it up in all honesty, except for what I write below and to say that it is a startlingly beautiful read.

James Hunter is shot down on his first mission with the RAF. Having baled out of his aircraft, he's fished out of the sea by a German patrol. For him, the war is over. He is taken to a pow camp. Meanwhile, his new wife, Rose, is left alone in their cottage on the edge of the Ashdown Forest in Sussex. While James turns to birdwatching at the camp to pass the time, his letters home are filled with such talk, something Rose struggles to connect with, her husband becoming ever more distant. She develops a friendship with someone else and begins an affair. When Jame's sister Enid is bombed out and loses everything, it's Rose she turns to and comes to stay. Rose, desperate to continue seeing this other man, closely guards her secret.As James studies the birds - Redstarts, keeping a journal, his 'hobby' catches the attention of the camp Kommandant, a man who shares his passion.The story really pursues the three characters who are all imprisoned, James literally, and Rose and Enid figuratively. The story is beautifully written with almost meditative prose, poetic, and well-plotted. A truly enjoyable book and well recommended and I award it five stars.

A must-read gripping adventure: French socialite turned Resistance courier. She'll do whatever it takes to defeat the Germans.https://t.co/BDzxm0ays2

Based on the true story of #NancyWake, one of the most highly decorated women of #WW2.#histfic #WomensFiction #Kindle pic.twitter.com/Yjbm1HGjB5