This weekend only: Grab a copy of Madame Fiocca FREE e-book until January 26th.

From the first paragraph of this enthralling biography that reads like a memoir, my attention was firmly grabbed and it never once flagged, even when it looked like Nancy’s life would be all love and roses. I had never heard of Nancy Wake, the independent, adventurous woman who seized life with both hands, living fully, embracing all it had to offer. But I immediately fell under her spell, tagging along as she made her way into adulthood and headlong into some of the most tumultuous times our world has ever known.
It took no time for Nancy to land plum assignments in Europe, where her love of food and culture bloomed. She lived a dazzling life as she made her way across the continent, reporting news of the emerging monsters—Mussolini, Franco and Hitler—as they cut a swath of misery and destruction across Europe. And in the middle of all the turmoil, Nancy fell in love with a man whose heart she had captured at first sight.
I can see why author Suzy Henderson was drawn to Nancy Wake, and the woman she would become, Madame Fiocca. As far as personalities go, Nancy was indomitable. She didn’t think twice about jumping into the fight against Hitler with both feet, regardless of the fact that she was a woman and had only minimal time to train.
Nancy relinquished her own happiness to help others to safety, to take up the fight, putting all she held dear at risk. She used her intelligence, her righteous hatred of Hitler and his goon squads, and her ability to slip past the enemy using her unique mixture of femininity, cunning and skills to her advantage. But it was her refusal to ever give up—regardless of pain or exhaustion or heartache—that makes her such a fascinating character. I absolutely loved this incredible account of a legendary woman—Madame Fiocca. 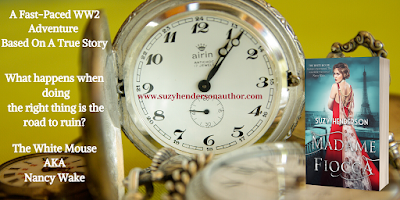