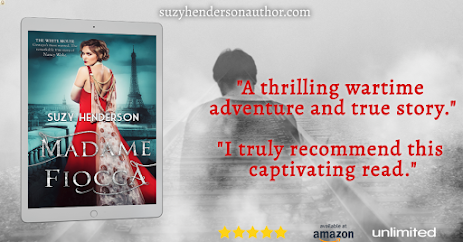 I first read about Nancy Wake and her role in World War Two several years ago, while researching another story. I recall thinking how commendable, but I read on, discovering other heroines of SOE including the American, Virginia Hall, the first female operative in France. What is even more remarkable is that she had a prosthetic leg. While working with the Special Operations Executive in France, Virginia had to escape over the Pyrenees, quite literally at one-point crawling part of the way. It was an incredible achievement and so courageous.

One day I came across an article about Nancy Wake, and it mentioned her husband. That caught my interest, so I bought a biography of Wake written by Russel Braddon. Suddenly, Nancy was on my mind and I wanted to know more, such as where she grew up, and her life before France. Braddon’s book was wonderful, but it didn’t cover much of Nancy’s life in Australia. I then bought Nancy’s own biography, written at a later stage in her life. Once again, not much in there about Australia, so I decided to go digging on the internet, turning to genealogy sites as I looked for family ties. Well, after many hours of searching and triple checking the facts, I discovered her family tree, unearthing British, Maori and French roots.

I discovered through Nancy’s own words in her books and tv interviews, that her father had abandoned her and her family at an early age. And there was something else that stood out every time Nancy spoke of her war times. She vehemently denied ever being afraid, saying things such as she was far too busy to be scared. I found this interesting, because I’ve also heard of soldiers and airmen who have said exactly the same. And then I’ve heard dozens more state that any man who said he wasn’t afraid in war is a liar!

The fact is, Nancy was the consummate actress, quite forward, openly flirtatious with German soldiers in order to bluff her way through check points for instance. She could probably do just about anything and so painting on a brave face was a simple task. Like a chameleon, Nancy was changeable and adaptable to any situation or environment.

The French men she fought with and led loved her. They thought she was amazing, and formidable. Nancy made many firm friends for life, and one of them, Henri Tardivat, once stated: “She is the most feminine woman I know, but when the fighting starts she is like five men.”

Food for thought indeed. My take was that Nancy would have been afraid. Fear is a natural response after all, but Nancy had a strong spirit and the strength to push on, doing what she needed to do despite the risks.

There’s a lot to consider when writing about a real person, and the fear factor was important to me because I knew it existed, and I didn’t wish to write a person who was completely without it.

Re-reads of the biographies gave me more insight – it’s funny what you miss when reading something the first or even the second time. Piece by piece Nancy was emerging before my eyes.

Having gone from learning about a New Zealander, raised in Sydney, who became a guerrilla fighter with the Maquis in France – a great leader of some 7000 men, I was suddenly facing a woman who bore her own emotional scars, who did admit to feeling worried at times during the war, and who was a true lady with the heart of a lion. She was a born leader, involved in dangerous courier work for Resistance groups from the very beginning in France, and well before she joined the Special Operations Executive. It was during this time that the Germans became aware of a woman operating in southern France, and they dubbed her “The White Mouse”, offering a bounty for her capture.

Her real story reads like something out of Hollywood, and I was hooked, and I knew I had to write about her, to enable people to see the real Nancy. She was a wonderful human being, kind, incredibly generous, the greatest friend to have, and incredibly patriotic and brave.

Nancy Augusta Wake began life with very little, and went on to marry a wealthy man, Henri Fiocca, living a millionaire’s life, only to lose it all through war. At the end of it all she had to start again. It’s a tragic story, but she eventually found happiness and perhaps some peace, later, when she met and fell in love with John Forward. They married and settled eventually in Australia.

Nancy never got over the loss of Henri. He was, as she often remarked, the greatest love of her life, and his selfless sacrifice was her one regret from the war years.

Henri was arrested in May 1943 and tortured by the Germans, but he refused to give up his wife’s location. On October 16th, 1943, Henri Fiocca was executed by firing squad. And to the end of her days, Nancy always declared that “the only good Nazi is a dead one”.